Many superheroes and comic book characters have made their way into films and TV shows and the DC Universe is no exception.

DC, though, has had its difficulties capturing enough interest in its Cinematic Universe, as evidenced by the recent Justice League film failing to draw at least $100 million for its opening weekend. The disappointing numbers comes after three more recent films pulled in at least $100M and one film, Wonder Woman, did such a good job retaining its audience that it finished past $400M domestic and won the summer box office crown.

But while the Cinematic Universe hasn't lived up to expectations, DC characters are doing a better job of that with the TV shows that aired on CW, a universe that has been dubbed the Arrowverse. Most recently, the Arrowverse paid off on its continued world building and character development with its most ambitious project to date, this year's crossover, Crisis On Earth-X.

What's remarkable about the four shows that make up the Arrowverse -- Arrow, The Flash, Supergirl and Legends of Tomorrow -- is that they focus on characters who may not be familiar to those who don't closely follow comic books. Ask a person who doesn't know much about comic books about Superman, Wonder Woman and Batman and they'll know exactly who you are talking about. But how many of those people would know anything about characters such as White Canary, Vibe, Killer Frost, Mr. Terrific and Vixen?

The movie universe started with the decision to relaunch Superman with the film Man of Steel -- a film that received mixed reviews and generates plenty of debate among comic book fans regarding the portrayal of its leader character. But rather than focusing on films for other individual characters -- Wonder Woman, the one iconic DC character who hadn't been featured on the big screen, was right there -- the decision was made to focus on Superman and Batman in the same film, with Wonder Woman taking a minor role.

Batman vs. Superman: Dawn of Justice drew a huge opening weekend but its box office declined rapidly. While a few people liked what the film delivered, many others found the film underwhelming at best or downright terrible at worst. But regardless of one's opinion about the film, it was clear that the intent with the Cinematic Universe was to jump right into the idea of Batman and Superman squaring off, leading up to the two of them uniting alongside Wonder Woman. There seemed to be no interest in rolling out individual films for other characters to get the ball rolling.

And the next film to roll out was Suicide Squad, in which a number of one-time villains are teamed up to work for the government. Thus the next installment was yet another case of characters teaming up for a common cause, rather than building up characters individually and leading to something bigger. Suicide Squad, like BvS, drew a large opening weekend but couldn't retain its audience.

The Wonder Woman film was well received overall, but now DC was already set down its path to build toward Justice League. They gave brief cameos to Flash, Aquaman and Cyborg in BvS, then decided to introduce them all in the Justice League film. Once again, there seemed to be no interest in giving any of the new characters their own film to allow people to get to know who they were and what made them tick. The end result is cramming in small bits of backstory into scenes, all while trying to find a reason for them to team up, and everything else gets the short stick.

Going right for the big payoff of teaming superheroes up, thus, has proven to be one of several major flaws in the direction of the DC Cinematic Universe. Movie goers are given little reason to empathize with some of the characters and little attention is paid to world building. Additionally, the villains come off as one-dimensional -- Steppenwolf is the perfect example, as he comes off as just another evil guy that only major comic book fans will understand, while general audiences are left wondering why they should care.

Compare that to the Arrowverse, in which it started small and built its world. Certainly one may argue that the creative team had to do that, given that most of the characters they wanted to roll out weren't well known to people who weren't major comic book fans. But the creative team still remained patient in how it build the universe, bringing elements in gradually and allowing audiences to get to know the characters who would be the focus, rather than heading right to the big teamups.

It started with Arrow, in which audiences got to know not only about Oliver Queen, but became familiar with other characters that were either created specifically for the show or were minor characters from the DC universe, who gained notoriety thanks to the patience shown by the creative team. John Diggle (created for the series) and Felicity Smoak (a minor DC character) both became prominent members of Arrow's world and audiences got to learn about characters ranging from Malcolm Merlyn to Slade Wilson in the first season.

By the time the second season rolled out, the creative team was able to build upon what had been established and introduce another character, Barry Allen. He would go on to become The Flash and that allowed for the Arrowverse team to launch a new series. Once again, the creative time took time to build its world there, getting audiences familiar with unique creations such as Harrison Wells and Joe West, while giving prominent roles to minor DC characters such as Caitlin Snow and Cisco Ramon. Flash may have done the best job so far of building its world and, in particular, getting people to become invested in the relationship between Barry Allen and Iris West.

Along the way, we saw a number of other DC characters get dropped into the two shows, with Ray Palmer appearing in Arrow and Martin Stein showing up in The Flash. Each show also introduced its own creations, Sara Lance and Jefferson Jackson, in recurring roles. The four, along with other characters, became integral parts of the next Arrowverse show, Legends of Tomorrow. That show allowed the creative team to build these once-minor characters in the other two shows and allow them to shine more. All the while, it got across the idea of having characters team up for a common goal. And when Flash had been launched, immediate plans were made to have Flash and Arrow cross over into each other's show to allow Oliver Queen and Barry Allen to team up. Combine the heightened interest in those episodes with the launch of Legends of Tomorrow, and it was only fitting that you'd want to see these characters all come together to tackle a major task.

But there was one more player added to the table when the Arrowverse creators reached a deal with CBS to launch Supergirl. Though CBS didn't show enough interest to pick it up for a second season, the creative team teased the idea that Supergirl could show up elsewhere when The Flash crossed over for an episode. And after CW agreed to take Supergirl into its lineup, the stage was set for the first major crossover.

Things weren't exactly smooth sailing with that crossover, as Supergirl being switched to CW late in the game meant the creative team wasn't able to seamlessly pull the show into the crossover (even as CW advertised it as being part of it). And when it did jump into the alien invasion, Supergirl tended to be awkwardly wedged into the shows, which each acted as a self-contained episode -- a big issue was Arrow commemorating its 100th episode at the time of the crossover.

Still, building up to the epic showdown between the superheroes and the alien invasion gave fans enough satisfaction and, more importantly, built interest in what could be done to have a true crossover that incorporated as many characters as possible and allowed them to go against a common enemy.

It was earlier this week that the Arrowverse creative team rolled out Crisis on Earth-X, in which those involved not only did well in tackling the major plot but did a good job incorporating the subplots and allow so many characters their moment to shine.

This crossover was filmed as a four-hour miniseries rather than four separate episodes, allowing them to seemlessly flow together rather than resemble exactly what each show was all about. And the moment that brought everyone together wasn't the crisis at first, but the wedding between Barry Allen and Iris West. What brought everyone together allowed the creative team to explore a bigger theme of relationships and love, both in the romantic sense and the family sense.

Of course, once the heroes are confronted with the chief antagonist -- individuals from Earth-X, on which the Nazis won World War II -- there's plenty of reason for fans to root for the heroes to save the day. And while exploring the subject of Nazis might be sensitive to some people, the creative team allowed those who have been the target of Nazi repression to step forward and be among the primary heroes. Along the way, certain actors got the chance to explore an alternate version of their characters and what things might look like if their characters had chosen the wrong path.

It made for the most satisfying teamup of DC superheroes in filmed form. And it all started with one series that was built up over time, with additional characters introduced along the way, new series launched and the world being built piece by piece, rather than a quick charge to the finish line for that first big team-up.

Not every season of every Arrowverse show has excelled, nor is everybody a fan of every character. This shared universe is far from being perfect in every way. But the creative team was patient in building things up, making the payoff of that huge teaming up of everyone something that generates more excitement from fans.

Now the creative team plans to roll out Black Lightning, but will give him his own series to start and keep it independent of the other shows. That's a wise move, because it allows viewers to get to know another minor DC character well, before he makes his eventual appearances in other shows and gets incorporated into a crossover, too. And, once again, the fans will have many reasons to be excited for it.

It goes to show that it's not always a good idea to make a mad dash for the finish line and roll out the big payoff right away. Taking your time to get to those big payoffs is what makes for a more satisfying experience. And the way they've done things so far with the Arrowverse, it's safe to say that future crossovers will do more to satisfy than to disappoint.
Posted by Unknown at 5:49 PM

What I Am Is What I Am

More About My First Book 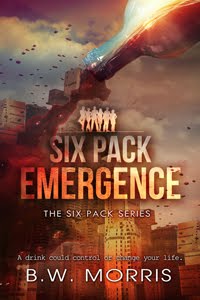